Journey (Călătoria) by Claudia Lee He In.

Journey by Claudia Lee He In.

“Since I was born
De când m-am născut
I have been a pilgrim
Am fost o pelerină
I was born between high mountains and low lakesides in Gangwon Province
M-am născut între munții înalți și malurile joase ale lacurilor din Provincia Gangwon
My journey is like climbing every day
Călătoria mea e ca o cățărare zilnică
Like walking on the water
Ca și mersul pe apă.
Now
Acum
I am sick very much
sunt foarte bolnavă
My life gets heavy
Viața mi-a devenit dificilă (grea)
But my mind is light like wind blowing to the mountains
Dar mintea mi-e ușoară ca vântul care bate prin munți
Like a bird that flies over the lake
Ca o pasăre care zboară peste lac.
Before I end my life
Înainte de sfârșitul vieții
I will tell it
Am să spun
To all of them I met on the streets
Tuturor celor pe care îi întâlnesc pe stradă
Waving my hands
Fluturănd din mâini
For the moments to cry much
Pentru moment să plângă mult
I accepted it as love
Am acceptat că este ca dragostea
I was happy, thankful and beautiful.”
Am fost fericită, recunoscătoare și frumoasă. 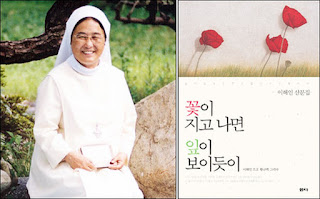 Sister Lee Hae-in, a Catholic nun and poet, chronicles dealing with cancer and the death of loved ones in “As If Leaves Are Seen After Flowers Fall” (Samtoh: 288 pp., 12,800 won), the cover of which is shown on the right.
/ Courtesy of Lee Hae-in, Samtoh

Sister Lee Hae-in, a Catholic nun and poet, has published a book written during the five years she was fighting cancer, and in the wake of a series of deaths of those who were close to her.

But the tragic incidents seem to make her faith and passion for life stronger than ever, as she looks back to the moments of pain, and, moreover, endurance.

Her writing in “As If Leaves Are Seen After Flowers Fall” (Samtoh: 288 pp., 12,800 won) shows the process of overcoming obstacles in a sophisticated way and sometimes so calmly that it’s touching. Lee has provided words of life, love and hope to readers through her poetic language, and emphasizes the importance of hope this time again to anyone, anywhere.

Her language is intensified with illustrations by Hwang Gyu-baek who portrays stone walls and a small bird we could pass by without noticing their existences.

Above all, her writings include her heartfelt messages full of yearnings and traces of the late figures such as Stephen Cardinal Kim Sou-whan, Ven. Beopjeong, Father John Lee Tae-suk, writer Jang Young-hee and essayist Pi Cheon-deuk.

Consisting of six chapters, the book has a preface written by the late author Park Wan-sue, actually a letter to Lee before Park died on April 16, 2010. Lee and Park had a solid friendship with each other. The letter reveals more heart-breaking messages from Park, saying “You are the holy tree in my hometown. I don’t want to see the tree withered during my life. I want to leave this world with your cares. Please, live longer than me. God, think my request a pity.”

Lee likens our lives to a tree which drops flowers but replaces them with leaves, reflecting on her fears and sorrows to see those who were close to her pass away.

“As if leaves rise after flowers fall, if somebody leaves me, his/her empty place feels bigger... Through the entire life, if we have wisdoms to better manage our sorrows when we meet and part people, can our lives be happier?”

Her book also contains several pieces of the letters exchanged with the late revered monk Beopjeong with whom she had many things in common in regard to observing life and gratitude beyond their religions. The Buddhist monk revealed his warm, frugal and restraint life and friendship between the two through the letters. “I regret that I didn’t go to Bulilam (a small temple just behind Songgwang Temple in South Jeolla Province) even though he invited me there,” said Lee. The correspondence includes Beopjeongletters written in the 1980s in Bulilam and in the 2000s at a rustic cottage in Gangwon Province. The writing captures the beautiful landscape of the natural background where the monk lived along with his warm-hearted observations of life.

Also, her portrayal of convent life shows her daily journals written in 2010 while she received treatment for cancer and struggled to beat the sorrow of her colleagues dying before her, but didn’t lose peace rather it kept a delightful tone in discovering the trivial happiness in daily lives.

“I tried to wake myself up and write the Christmas letters, not to fall into a kind of asthenia and say hello to the visitors in the convent. Or I tried to listen to neighbors’ small talk in the alley and the post office. Anyway I had to make the efforts to get out of myself. Cancer patients tend to suffer depression. So to prevent this, I should try harder,” she said.

To commemorate the deceased figures, she wrote poems and verses full of yearning and respect to them. She recalled the memory of the late cardinal. “One day, the cardinal asked me if I received treatment for cancer and I said ‘yes’ and then he said, ‘You’re so great.’ So I almost tore it up. Since then, I have said so to those who endure all the pains as the cardinal did,” she said.

Toward John Lee Tae-suk who devoted his life to the Sudanese people as a medical practitioner and Catholic missionary, she said his love made all the people unite through his devotion and effort to adapt himself to the local environment. “I heard you were shouting that life filled with selfishness and complacency is not a desirable one through your strong silence,” the author said.

The book closes with her poem “Journey,” which condenses her perspectives on life and sympathy for all that is disappearing
Publicat de Viorica la 02:21 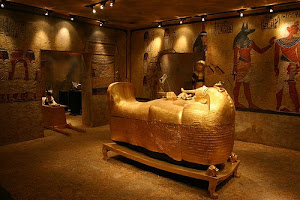 adopt  your own virtual pet!